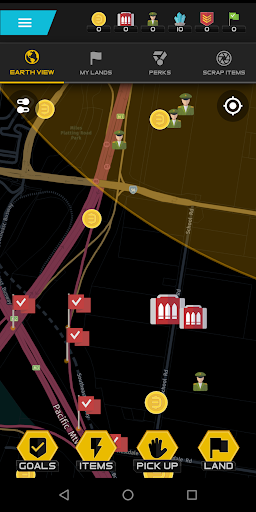 Augmented Reality strategy game “Domination: Earth” operates in the real world around you – military style! Check in wherever you go using your phone or tablet to capture places and pieces of land, expanding your global empire – like Geocaching on steroids!

Tactics include capturing lands to build military bases and recruiting armies in order to establish regional dominance. Create alliances with your neighbors to fight against foreign threats or simply build a missile launcher in your backyard and protect your hometown of invaders!

Construction resources will pop up all over the globe, so in the process of their collection you can explore places you’ve never seen before. Why not go hiking or cycling? Explore and adventure to secure valuable resources! Traveling to another country? Don’t forget to check in five times in any spot to establish a new base of operations. Once you’ve collected enough resources you can send your armies to the overseas base in order to advance your influence remotely, even after you’ve left!

Another clever aspect of the game is “item scrapping”: scanning any real-world item with a barcode and transforming it into a resource by using your camera (don’t worry, you still get to keep your items afterwards!). Books, toys, DVDs, soda cans – almost anything becomes a source of useful material.

Now go forth and rule the world with Domination: Earth!
Miscellaneous bug fixes and improvements. See forum.domination.earth for details.