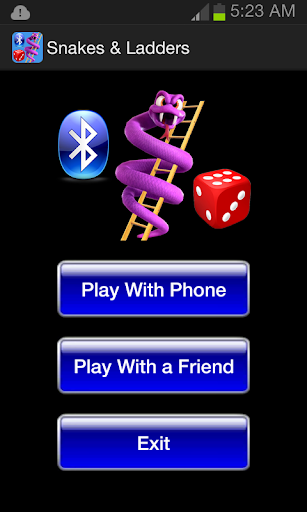 This is a Bluetooth based multiplayer game and most suitable for children. You can find many Snakes and Ladders games on Google play. Although the Snakes and Ladders is a multiplayer game, non of those supporting for that feature up to now. Two players can play this game on their own mobiles by connecting via Bluetooth. For that, both of the devices should have to install this game. We have reduce the number of squares for win, then you can finish the game quickly.

Features:
1. Totally Free
2. You can use your own mobile to play with friends.
3. Now the game pieces are moving.
4. Automatically turn off the Bluetooth when exit.
5. Single player feature also available

This version has no changes.
But a good news.
We restart this project and a new version is coming soon.
We have read your feedbacks and as an initial stepe, the new version will have,
1. Various sizes boards.
2. Dice value with animation
The multiplayer option with new boards may late a bit.
For funding that project. We re added the banner ads to this version and that will not be a disturb to you.